Precise identification of neuronal populations is a major challenge in neuroscience. In the striatum, more than 95% of neurons are GABAergic medium-sized spiny neurons (MSNs), which form two intermingled populations distinguished by their projections and protein content. Those expressing dopamine D1-receptors (D1Rs) project preferentially to the substantia nigra pars reticulata (SNr), whereas those expressing dopamine D2– receptors (D2Rs) project preferentially to the lateral part of the globus pallidus (LGP). The degree of segregation of these populations has been a continuous subject of debate, and the recent introduction of bacterial artificial chromosome (BAC) transgenic mice expressing fluorescent proteins driven by specific promoters was a major progress to facilitate striatal neuron identification. However, the fraction of MSNs labeled in these mice has been recently called into question, casting doubt on the generality of results obtained with such approaches.

Here, we performed an in-depth quantitative analysis of striatal neurons in drd1a-EGFP and drd2-EGFP mice. We first quantified neuronal and non-neuronal populations in the striatum, based on nuclear staining with TO-PRO-3, and immunolabeling for NeuN, DARPP-32 (dopamine- and cAMP-regulated phosphoprotein Mr∼32,000), and various markers for interneurons. TO-PRO-3 staining was sufficient to identify MSNs by their typical nuclear morphology and, with a good probability, interneuron populations. In drd1a-EGFP/drd2-EGFP double transgenic mice all MSNs expressed EGFP, which was driven in about half of them by drd1a promoter. Retrograde labeling showed that all MSNs projecting to the SNr expressed D1R and very few D2R (<1%). In contrast, our results were compatible with the existence of some D1R-EGFP-expressing fibers giving off terminals in the LGP. Thus, our study shows that nuclear staining is a simple method for identifying MSNs and other striatal neurons. It also unambiguously confirms the degree of segregation of MSNs in the mouse striatum and allows the full exploitation of results obtained with BAC-transgenic mice. 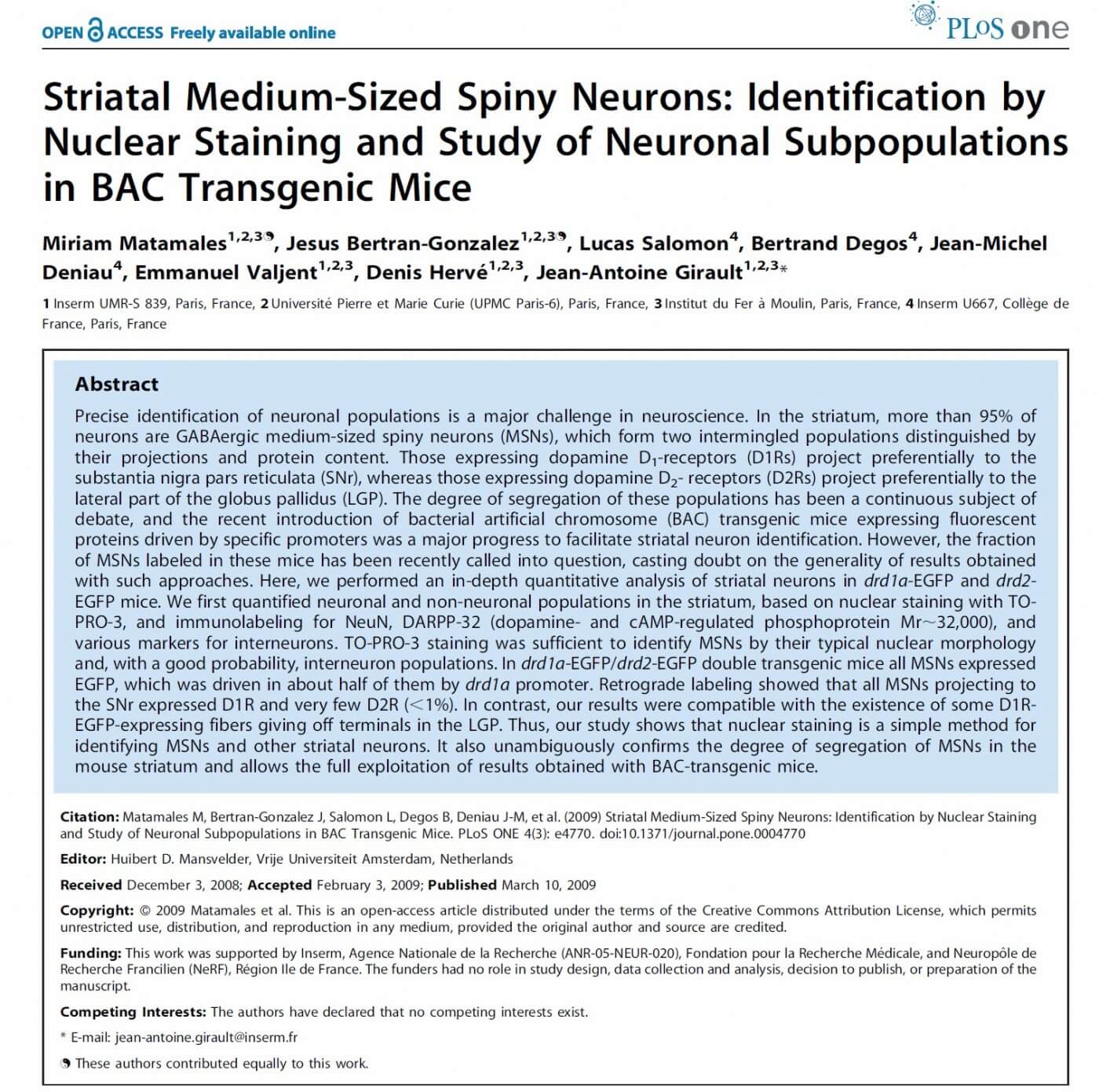